Information on the percentage of Microsoft‘s on-premise software licenses that have moved to a cloud-based, Software-as-a-Service (SaaS) model, how the future of this trend will look like, and the factors driving this migration trajectory can be found in this brief. The on premise software market is declining at about 4% per year and reports indicate that Microsoft’s Azure platform is among the top reasons why Microsoft dominates the SaaS market.

Percentage of Software Licenses That Have Migrated to SaaS Model 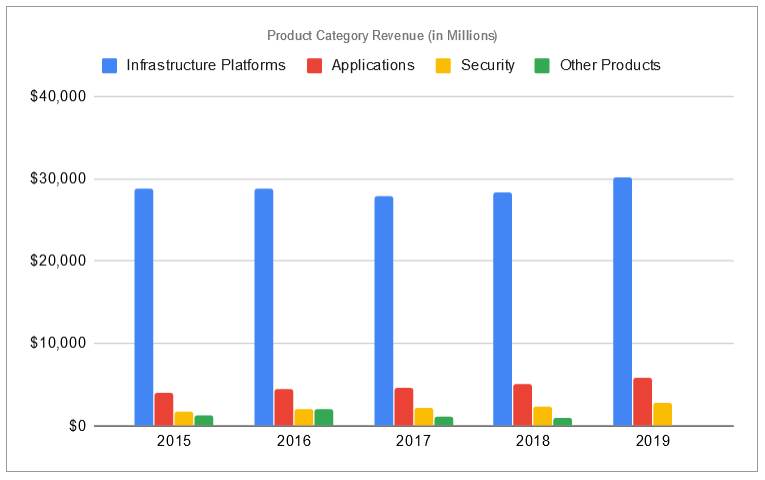 Projected Growth of the Aforementioned Percentage

Drivers of Migration to SaaS Model

As requested, Cisco’s press releases, investor call transcripts, conference speeches/keynotes, financial reports, and other disclosures were reviewed first for details about the company’s transition to the SaaS model. This step was followed by an examination of industry reports and media’s coverage of Cisco. We learned that while Cisco has not disclosed the percentage of its software licenses that were migrated to the SaaS model, it has disclosed the percentage of its software revenue that is accounted for by subscriptions. Given that the SaaS model is a cloud- and subscription-based model, it is likely that these software subscriptions are the company’s SaaS offerings.

IBM’s cloud-based, Software-as-a-Service (SaaS) model, IBM Cloud, is among the top four most preferred cloud providers by the US government agencies. The company expects its acquisition of Red Hat to further accelerate the growth of its cloud business. We have provided below the required information about the cloud-based, SaaS model of the company.

While the company has not disclosed the percentage of its software licenses that have migrated from the traditional, on-premise license model to a cloud-based, SaaS model and the projection for the same, we were able to garner various valuable insights around the adoption of IBM Cloud and the projected industry growth for cloud-based, SaaS model adoption. We began by scouring through the company website, its press releases, financial filings, earnings call transcripts, management commentary, conference speeches, and company presentations, among others, but no relevant data could be found. All the data was focused around the features of IBM Cloud, the company’s revenue growth from its cloud business, and the recent acquisitions that it has made to grow its cloud-based SaaS business. Next, we searched through the industry reports from Gartner, Deloitte, McKinsey, Bloomberg, Flexera, etc., but all the publications provided industry level projections for cloud adoption, with no data specific to IBM Cloud. We also searched through media articles from Forbes, WSJ, Reuters, Business Insider, and Techcrunch, among others, but again no pertinent information could be located. All the information found was related to the various surveys conducted by IBM and other organizations on the state of cloud adoption by enterprises. Lastly, we tried to triangulate the data for on-premise to SaaS model migration by computing the percentage changes in the on-premise and cloud-based model revenues of the company. Hence, if the on-premise model revenues fell by x% and the SaaS model revenues increased by y%, we could have assumed that x% of the on-premise clients shifted to the SaaS model, and the rest (y-x) were new SaaS clients. However, the company has not provided any revenue data for its on-premise license model due to which the triangulation could not succeed.

As of February 2020, 37.3 percent of VMWare’s userbase has migrated from the traditional licensing model to its software-as-a-service (SaaS) subscription model. VMware’s SaaS offering is its fastest-growing division, with the segment reporting double-digit growth rates between 2015 and 2020. 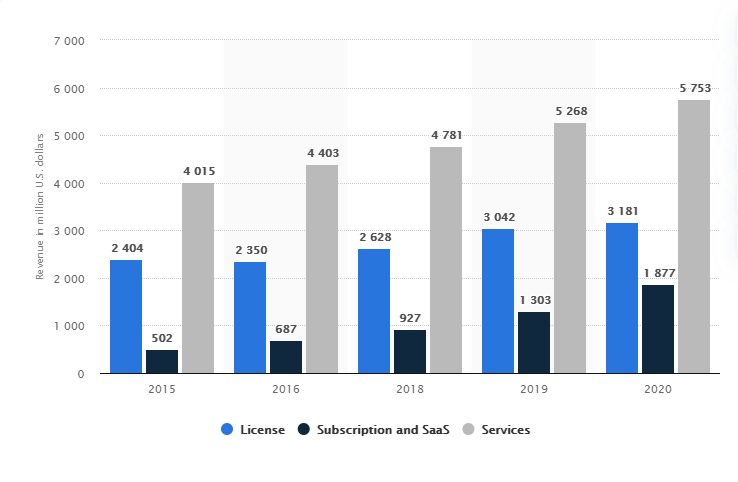 To get the percentage of Oracle customers that have migrated from the traditional on-premise license to its cloud-based SaaS model, we initially checked through its website, annual reports, financial statements, and investor call transcript, or press releases. We also looked for information from other credible sources, but this is not directly available. To check whether customers are actually migrating from the traditional to the cloud-based model, we instead searched for the 2019 revenue information of Oracle’s cloud-based segment and its on-premise segment from its previous revenue inform.
In a 2018 article published by Forbes, it was projected that Oracle’s cloud-based model revenues will have a 5-6% year-over-year increase while on-premise license revenues will fall up to 3%. To have more concrete figures, we used 2017 and 2019 Oracle revenues from these two segments. Based on the available data, we used a CAGR calculator to get the percentage of growth (or decline) of the revenues from these segments.
For the cloud services and license support segment (where SaaS is 95% part of): — Starting value: $23.8 billion (2017) — Ending value: $26.7 billion (2019) — No. of periods: 2 years (2017 to 2019) — CAGR: 5.92% (growth)
For the on-premise license segment: — Starting value: $6.5 billion (2017) — Ending value: $5.9 billion (2019) — No. of periods: 2 years (2017 to 2019) — CAGR: -4.73% (decline)
In the absence of a directly available data, we used these segments’ revenue information as indicators that customers are increasingly migrating from Oracle’s traditional on-premise license model to its cloud-based SaaS model.

SAP recorded about 39% surge in cloud sales in 2019 due to the continued migration of customers to cloud-based SAP models. The number of SAP customers who recently migrated from traditional (legacy) platforms associated with on-premise licenses to SaaS platforms with cloud-based licenses has changed from 0.36% in 2008 to 14.49% in 2020.

PEOPLE OF COLOR – BARRIERS TO VOTING

What is the Average Weekly Wage Paid by U.S. Businesses in the First Quarter?

Understanding the Medical Foods Market (the Process to Get Approval for Medical Foods, and Case Studies of Companies that Have Created Medical Food Products)

Everything You Need to Know About Contextual Banking (With Case Studies)